Category: Going Deeper: Beyond the Sermon 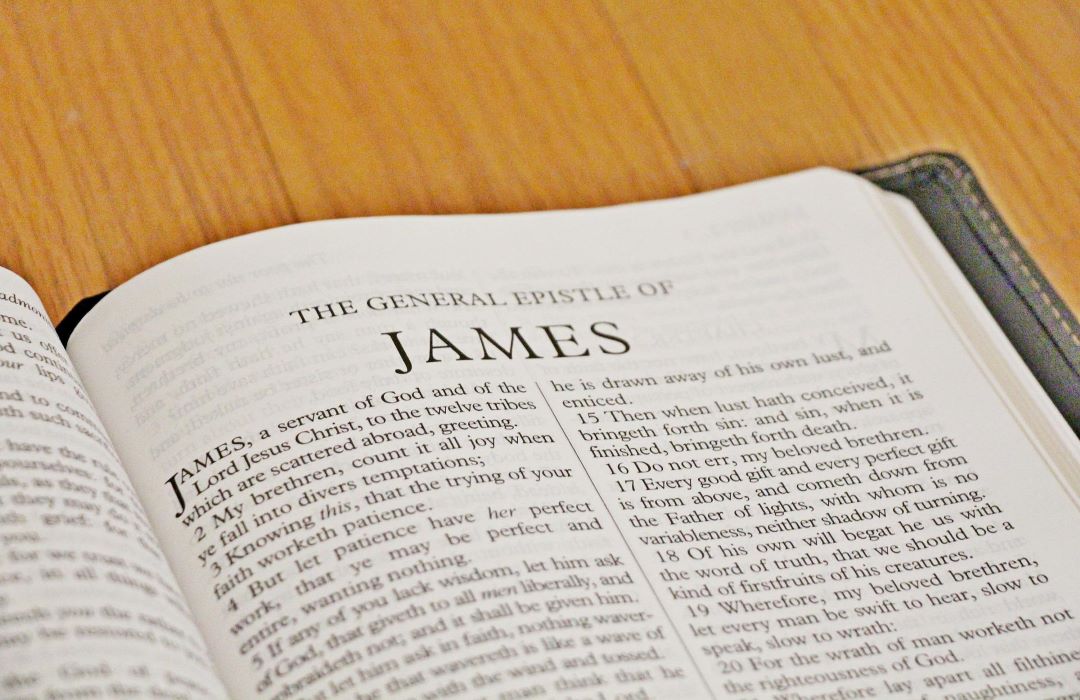 The author of this letter identifies himself simply as James, a slave of God and of the Lord Jesus Christ (v. 1). The reason for the typical English rendering of the Greek Ἰάκωβος as James is not entirely clear. Merriam-Webster indicates that James is a derivative of Vulgar Latin Jacomus, which is itself an alteration of late Latin Jacobus, though the English form of the name possibly comes from the Old French Gemmes, which is also related to the Latin Jacomus.⁠1

James self-identifies as a slave (δοῦλος) of God and of the Lord Jesus Christ. The identity of this person is debated, not least because the New Testament includes references to multiple people bearing the name. Still, the author is traditionally recognized as the brother of Jesus. Likely, James did not believe in Jesus during his earthly ministry (John 7:5), though it is clear that he came to believe in Jesus as the Messiah later on. He held a prominent position in the early church and appears to be the presiding elder at the Jerusalem council (Acts 12:17; 15:13-21). Additionally, the Apostle Paul recognized James’s position in the church (Gal. 2:9) and even counted him as an apostle (Gal. 1:19). It is not surprising that James authored this letter for circulation among Christians outside of Jerusalem, referred to as the twelve tribes dispersed abroad.

Although we can confidently identify the author as Jesus’s brother, we should exercise some restraint in reading James’s experiences into our interpretation of the letter. James chooses to identify himself as a slave of God and of the Lord Jesus Christ, so that is the primary way he wishes to be understood by his readers. His proximity to Jesus and the other apostles did shape his theology and teaching. For example, there are obvious points of contact between James’s teaching and the record of Jesus’s teaching in the Gospel accounts. Still, it is his relationship to the Lord Jesus Christ as a slave (δοῦλος) that functions as his presenting identity.

The consequence of emphasizing his identity as a slave of God and of Jesus rather than as a brother of Jesus is a greater appreciation of James’s prophetic role. In the Jewish background, slave terminology in connection to God was used to designate intermediaries between God and his people, especially of prophets and messengers of the Yahweh.⁠2 In this way, James takes on the role of a prophet for the people of God, dispensing wisdom and warnings that are intended to guide and correct the people of God. Against the Old Testament background, the title slave does not emphasize someone without authority but rather signals an authoritative prophet of God.

The Audience: The Twelve Tribes

James addresses his letter to the twelve tribes dispersed abroad (v. 1)—often referred to as the Diaspora. The reference to the twelve tribes is most likely a reference to ethnic Jews. However, his audience is undoubtedly limited to those Jews who, like himself, have believed in Jesus as the Messiah. Writing from Jerusalem, James sends his letter to Jews outside Jerusalem who have taken up residence in various geographic locations.

Although it is sometimes suggested that these Jews fled Jerusalem because of persecution, this conclusion is unlikely given the dating of the letter and the probability that James himself was writing from Jerusalem. More likely, these Jews were living outside of Jerusalem (and possibly outside of Israel) for various reasons and had been for differing lengths of time—perhaps reaching back to the exile. Further evidence against the view that persecution drove these Jews from Jerusalem is found in John 7:35. That text records a conversation between Jesus and the Pharisees in which Jesus told them that he would soon be returning to the one who sent him. The Jews responded by asking, somewhat incredulously, if Jesus was going to go to the Jewish people dispersed among the Greeks. In this instance, it is clear that the dispersed are ethnic Jews and that they were dispersed before any possible persecution connected to belief in Jesus as the Messiah.

Non-Jewish Christians should receive this letter as Scripture for them as well, even though James directly addresses only Jewish readers for several reasons.

First, neither the ethnic nor geographic identity of the readers is the most important thing about them. Just as a Jewish reader in Jerusalem could receive the letter despite its address to Jewish readers outside of Jerusalem, so also Gentile readers. The most important feature of the recipients is that they have believed in Jesus as the Messiah. All those who have done so can receive this letter as Scripture.

Second, the terminology of the twelve tribes represented the restored Israel under the Messianic King, Jesus. The disciples stand at the center of the restored Israel, and they carry forward the message of the Messiah as they gather others into the renewed Israel.⁠3 Gentile believers in the Messiah were included in this restored kingdom and, for that reason, would find the instruction for wise living under the rulership of the Messiah just as authoritative, not to mention as practical, as the Jewish readers would have.

Third, James’s letter is likely the first New Testament document. James wrote the letter before Paul took up the Gentile mission. Following the pattern in the book of Acts, it is natural for the message of the Messiah to go to the Jewish communities first and then to the non-Jewish communities. The message first received by the Jewish communities came to them as a matter of chronological priority, not ethnic exclusivity. It is worth noting that James’s letter also received canonical priority in the earliest arrangements of the New Testament canon. In these arrangements, James immediately follows Acts. In later arrangements of the New Testament, like our own, Romans receives canonical priority. The consequence of recognizing James’s chronological and canonical priority is that instead of reading James through the lens of Paul’s teaching, we read Paul through the lens of James’s teaching. One commentator explains that James’s canonical priority “adds a bit of octane to our reading of this little letter. As James the leader should not be marginalized, so James the letter should not be marginalized either.”⁠4 In other words, far from rejecting James’s letter because it isn’t addressed to non-Jews, we should value it all the more.

Fourth, in his discussion of faith and works, James draws on both Jewish and Gentile examples, underscoring that connection to God through faith is a fundamental mark of identity that transcends ethnic identity. He specifically recalls Abraham’s active faith (who we might identify as the founding father of the Jewish people) and Rahab’s active faith (who was a Gentile convert during the conquest). Just as Jews and Gentiles were called on to hear and respond to God’s prophet word in ages past, so too in the present.

Other reasons could be considered in addition to those noted above. Still, based on these reasons, we can safely conclude that both non-Jewish and Jewish Christians can (and must!) attend to James’s letter as authoritative and instructive Scripture.

A final note on the terminology of the dispersion/Diaspora is in order. This terminology has sometimes been applied to Christians, suggesting that Christians are scattered far from their heavenly home.⁠5  Although this picture might be comforting to some, it constructs the notion that eventually the Diaspora will be gathered up to a heavenly home. Yet, James’s message was not that they will be gathered up and taken away but that God meets them where they are by freely dispensing his heavenly wisdom to them (James 1:17; 3:13-18). In other words, the call to the believing community is not to “come home” (either to Jerusalem or to heaven) but to live in faith with wisdom and righteousness wherever they might find themselves.

James writes in ancient Israel’s prophetic and wisdom traditions, bearing a remarkable resemblance to Jesus’s teachings. Although James addresses his letter to ethnic Jews, there are good reasons for every follower of Jesus to receive this letter as authoritative and instructive.