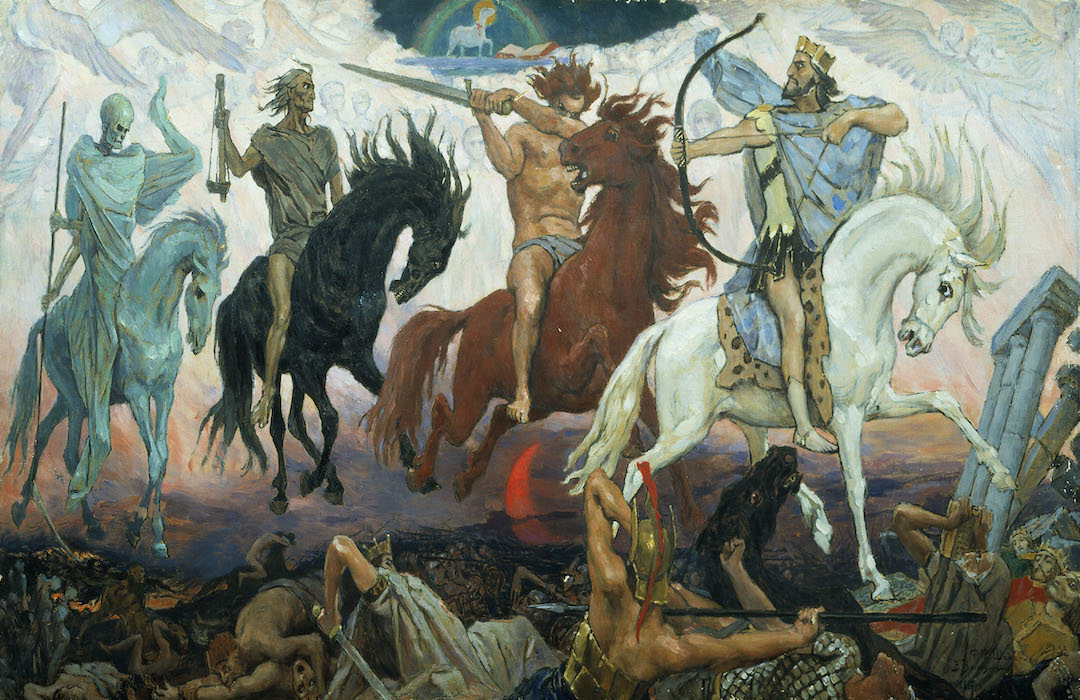 A sharp sword came from his mouth, so that he might strike the nations with it. He will rule them with an iron rod. He will also trample the winepress of the fierce anger of God, the Almighty. And he has a name written on his robe and on his thigh: King of Kings and Lord of Lords.

The book of Revelation is comprised of both apocalyptic and prophetic literature. Modern readers rarely delve into either genres, so texts like this one strike with a note of unfamiliarity. What do these verses mean and how should we understand them?

First, when reading texts from Revelation we need to interpret them with the literary genre in mind. The best way to calibrate our sensitivities is by reading other apocalyptic and prophetic literature. We find this literature in the Bible as well as in other places, such as in the Dead Sea Scrolls or the Apocrypha. Ultimately, though, we should generally understand the language to be figurative rather than literal. For example, when the author describes a sword coming from the mouth of the rider on the white horse, we should think in figurative terms: the rider on a white horse speaks authoritatively and finally.

Second, when reading texts from Revelation we should remember that the author (the Apostle John) wrote other texts of Scripture, in particular, the Gospel of John and 1-3 John. We should try to understand the more difficult texts of Revelation in light of the theology presented in his less difficult writing. For example, 1 John 2:28 encourages believers to remain in Christ so that we will not be ashamed before him at his coming. Many identify the figure described in Revelation 19:15-16 as Christ. We can better understand the importance of abiding in Christ in preparation for his coming when we read the depiction of his coming in apocalyptic terms in Revelation 19.

Third, when reading later biblical texts we should assume that the author was familiar with earlier biblical texts, especially with the Pentateuch and the Psalter. For example, Psalm 2 warns those who stand in rebellion against God that one day God’s anointed king will “break them with an iron scepter.” As such, they ought to “Pay homage to the Son or he will be angry and you will perish in your rebellion, for his anger may ignite at any moment.” John appears to understand this Psalm in prophetic terms and reframes the psalmist’s description in the apocalyptic imagery of Revelation.

Revelation can be challenging to read and, as a result, fail to be incorporated into our regular devotion meditation and Scripture memory. But this important book has encouraged the persecuted and downtrodden for centuries and can do the same for us, especially if we work to read it on its own terms, in light of John’s other writings, and with reference to other biblical texts.