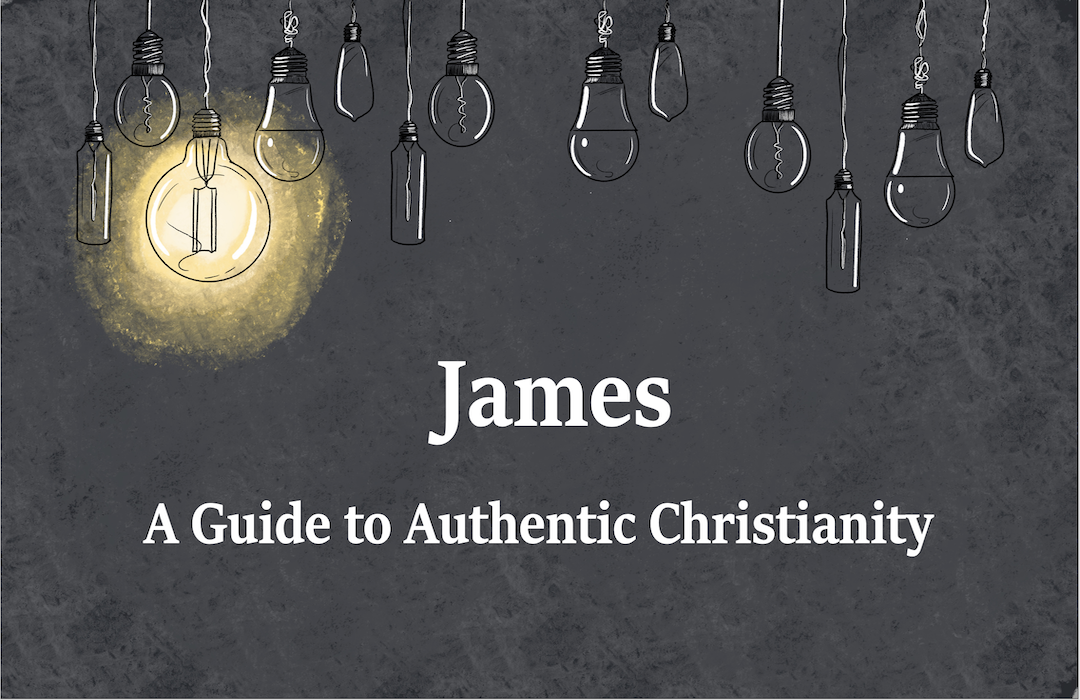 James’s short but incisive letter teaches what it means to walk in the way of wisdom that issues forth in authentic Christianity. James addresses a variety of topics related to the Christian life, including suffering, desires, speech ethics, anger, social justice, holistic obedience, wise living, and prayer. Each topic that James takes up contributes to a larger call to authentic Christianity and wholehearted commitment to God.

Christians should consider trials an opportunity for joy, even though trials are never pleasant. Because God uses tribulation and trials to make us whole and holy, hardship can give way to happiness as God transforms our suffering into sanctification. For Christians, trials are not something intended to challenge our faith but to change us into more faithful followers of Christ.

God is extremely generous, offering wisdom to all who ask wholeheartedly seeking wisdom from above. This wisdom, defined as moral skill, will enable Christians to navigate their trials. However, a warning is needed: Christians should not ask God for wisdom while also hoping to find help from the world’s way of dealing with hardship. Instead, they should trust God and accept his wisdom that allows them to endure trials virtuously in imitation of Christ.

James 1:9-12 | The Counterintuitive Wisdom of God

Christians might be inclined to think that if they are living wisely, everything will go well for them—they will be wealthy, happy, and healthy! But God’s wisdom shows us that hardship and prosperity are meaningless metrics for evaluating our success in life because God will bless the poor and overturn the fortunes of the rich.

Christians must avoid misinterpreting their trials, especially when they respond sinfully to the hardship they face. They may be tempted to think that God is out to get them, tempting them to sin. On the contrary, God is perfect, holy, and the source of every good thing. He is so good that he can transform death into life through the Word of Truth.

Christians must receive the Word of God by paying attention through careful listening to God. James pictures God’s Word as a seed that is planted in the soil of the heart. That soil needs to be kept free from the weeds of sin, especially the sins of hasty speech and outbursts of anger.

Christians must not only receive the Word of God, but they must also respond to the Word of God. Instead of simply hearing the Word, they must put the Word into action by doing it. James draws on Jesus’s teaching, where doing the Word is associated with the blessing of belonging to Jesus’s family.

Many people claim to be religious but fail to be Christian. Authentic Christianity involves (1) controlled speech (possible only through the transformation of the heart), (2) care for the vulnerable, and (3) moral purity. In every age of the Church, there is the danger of turning Christianity into mere doctrinal affirmation. James wants that doctrine to enliven acts of social justice (in keeping with the Old Testament prophetic descriptions) and holy living.

Favoritism is incompatible with faith in our glorious Lord Jesus Christ. Faith and favoritism don’t mix because God often chooses the poor to become his kingdom citizens, because the wealthy are generally disinclined to contribute their wealth to kingdom causes, and because it is the wealthy who are most inclined to disparage Christ and his kingdom (James 2:1-13). There is a perennial temptation to validate Christianity through association with celebrities, politicians, and the affluent. But Christ’s kingdom is comprised of the meek and lowly of heart.

Faith without action is a faux faith—it’s a counterfeit form of faith. Authentic faith is a living and active faith that demonstrates itself through good works. Authentic Christianity is not merely a matter of personal piety or spirituality. Although authentic faith is personal, it is never private. Instead, it transforms the whole person, working itself out in doctrinal fidelity, love for God, and love for others. Authentic Christianity involves the whole person (head, heart, hands) and infuses all of life.

James 3:1-12 | The Disproportionate Power of the Tongue

Teachers must especially use caution when it comes to the disproportionate power of speech, but every person should be careful in this regard. The way that a person uses speech indicates what is going on in the heart. Words function like a thermometer, revealing the state of the heart. The aim of Christianity is not to suppress speech but to renew it so that it brings life and flourishing instead of relational harm and spiritual death. No one can tame the tongue on their own. This can be done only through a transformation of the heart.

Authentic wisdom is demonstrated through Christlike gentleness. In the world system, the point of “wisdom” is to gain enough knowledge and savvy to get your own way and to exercise power over others. But this is wisdom from below—it’s a counterfeit form of wisdom, just as faith without action is a counterfeit form of faith. True wisdom is defined by moral virtue and results in peace instead of the exercise of power over others; it produces a harvest of righteousness instead of self-righteousness.

For most of the letter, James has pointed out the hypocrisy that is found so often in Christian communities. Although Christians everywhere claim to be authentic, very often, their actions betray the opposite. Now, James reveals that the biggest problem: the heart. Our sinful hearts are the biggest problem. The answer is not a list of rules to follow but to see the faithful heart of God and humbly repent. Because God gives grace to the humble, he will exalt all who humble themselves before him.

Jesus brings people to God, allowing them to know and love him and, more importantly, to be known and loved by him. Still, Christians can sometimes operate as if they do not know God or even recognize his existence, living as practical atheists. Practical atheists replace the Word of God with their own law as they become judgmental toward others while at the same time violating Christ’s commands (hypocrisy and legalism combine here). They also ignore the will of God and live without conscious dependence on him.

James has already warned his readers against idolizing money. Now, he writes a stern warning against those who do as a way of reminding Christians of the severe judgment on materialism. Materialism regularly fuels human exploitation and will be met with God’s judgment on the final day. In the present, however, consumerism has a way of producing misery as money and materials deteriorate, consuming those who consume all that they can acquire.

James begins the ending of his letter with another call to suffer well, returning to the letter’s opening topic. He instructs that to suffer well, Christians should patiently wait on God, refuse to complain about believers, follow the good examples of God’s people who have suffered well (especially the examples of the prophets and Job), and commit to God completely, trusting him to transform their suffering into sanctification.

James 5:19-20 | A Community of Mutual Accountability

Most New Testament letters end with a benediction or a word of blessing as the author imparts the grace and peace of God our Father and the Lord Jesus Christ. Instead of imparting grace and peace, James instructs believers to keep each other accountable so that the community will be defined by grace and peace as sinners are restored to God and to one another. Embedded in these instructions is the hopeful promise that God, through Jesus Christ and by the Holy Spirit, offers forgiveness to all those who repent.

Wright, N. T. and Michael F. Bird. The New Testament in Its World: An Introduction to the History, Literature, and Theology of the First Christians. Grand Rapids: Zondervan, 2019.

Chester, Andrew and Ralph P. Martin, The Theology of the Letters of James, Peter, and Jude. Cambridge: Cambridge University Press, 1994.

Davids, Peter H. A Theology of James, Peter, and Jude: Living in Light of the Coming King. Biblical Theology of the New Testament. Grand Rapids: Zondervan, 2014.