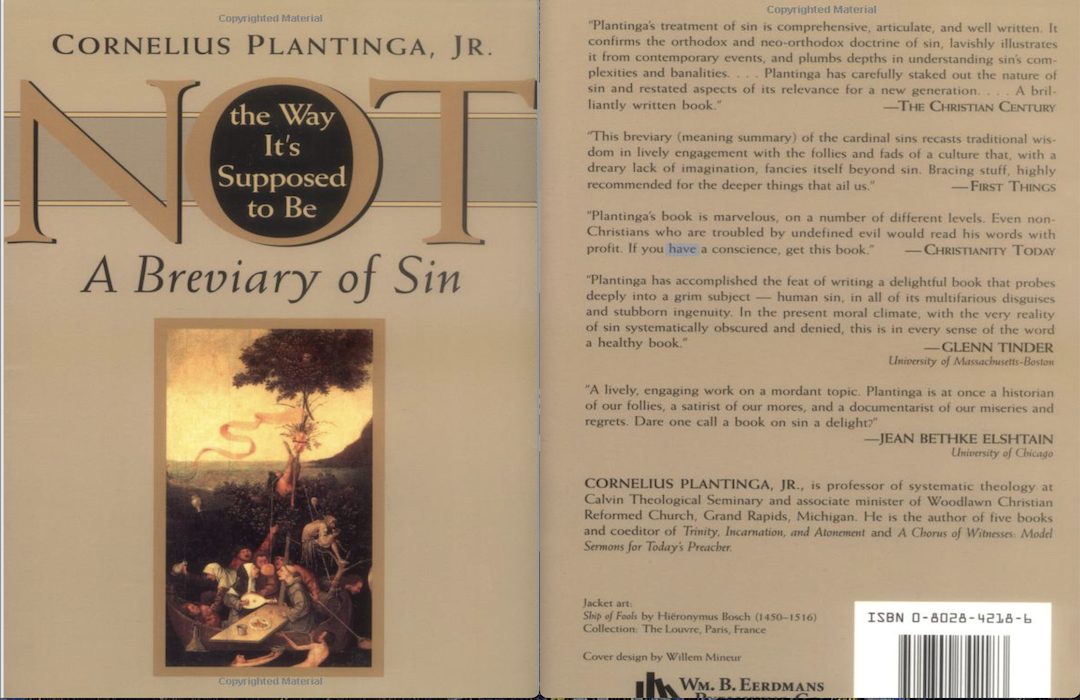 Plantinga begins his books with the assertation that Christians need to restate the doctrine of sin, even though it has stated in the past. A restatement is needed because “Recalling and confessing our sin is like taking out the garbage: once is not enough” (x). The need for a restatement of the Christian doctrine of sin is all the more urgent when the consequences of ignoring sin and the grace that deals with it. Ignoring sin makes us less conscious of it, and when we become less conscious of sin, we become less conscious of grace. He explains,

Many of us have lost this knowledge, and we ought to regret the loss. For slippage in our consciousness of sin, like most fashionable follies, may be pleasant, but it is also devastating. Self-deception about our sin is a narcotic, a tranquilizing and disorienting suppression of our spiritual central nervous system. What’s devastating about it is that when we lack an ear for wrong notes in our lives, we cannot play the right ones or even recognize them in the performance of others. Eventually we make ourselves religiously so unmusical that we miss both the exposition and the recapitulation of the main themes God plays in human life. The music of creation and the still greater music of grace whistle right through our skulls, causing no catch of breath and leaving no residue. Moral beauty begins to bore us. The idea that the human race needs a Savior sounds quaint (xiii).

Plantinga helps renew our awareness of sin, not to make us overly burdened with guilt, but to open our ears to the music of grace that our eyes to moral beauty. This book was now, just as it was needed in 1995. Writing in Lewis-like prose, Plantinga introduces a theology of sin for the modern person.

In what follows, I will bullet some of the most helpful or insightful quotes from the book, but the book is more than a collection of quotes and cannot be replaced by them. Still, they may spark enough interest to take up the book and read. Nearly 39 pages are available for preview on Google Books, so you can see many of the quotes in fuller context there. For those who are interested, Plantinga also wrote an essay, “Sin: Not The Way It’s Supposed to Be.” This essay is essentially a chapter-length abridgment of the book.

Chapter 4: The Progress of Corruption

Chapter 8: The Tragedy of Addiction

Plantinga lists eight ways that we shirk responsibility for our actions.